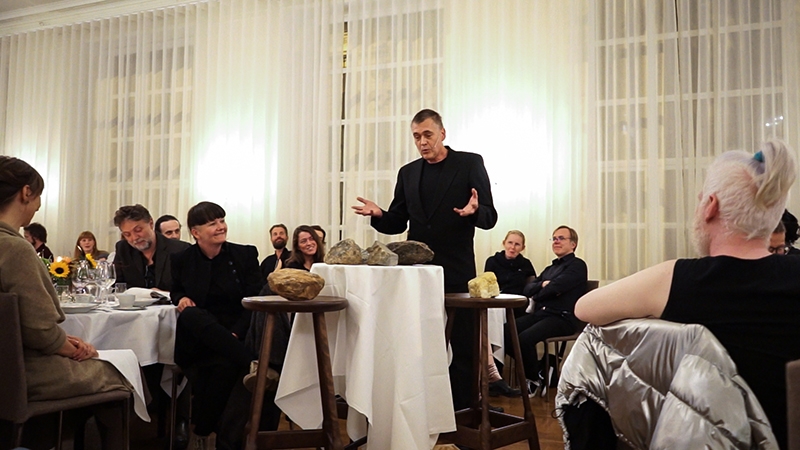 In connection with the festival in 2022, Performance Art Bergen initiated a professional forum where we have invited artists and professionals within the professional art scene to give us their refections on the international/national and local performance art scene NOW. We have asked them to give us their refections on live performances during the pandemic and how this can potentially has changed the artist’s expression. The seminar during PAB OPEN 2022 will therefore have a thematic focus on current trends. In the seminar, we will focus on the performance art scene now, discussing current trends, the pandemic’s effect on cultural activities, especially aimed at performance art, where audience participation is essential to our expression.

Dagmar I. Glausnitzer-Smith completed
her MA Fine Arts and Philosophy at the Royal College of Art London (2000) and BA Liberal Arts at Goldsmiths ‘College London (1994). She was awarded the Picker Fellowship Award from Kingston University (2000-2003). She organized art projects in Germany, international workshops and residencies for performance art (2005-2010). She was also involved in the production of the events transitstation in London (2003), Berlin (2005), Edinburgh (2006) and Copenhagen (2010). From 2002-2017 she was a lecturer at Kingston University, London specializing in performance art.

Tanja Thorjussen (b. 1970) is an artist and curator living in Oslo (NO). Her artistic medium spans between drawing, art in public space and performance which often explore mystic and spiritual in nature, ecofeminism and the science embedded in indiginous knowledge and ancient mythology. From 2013- 21 she collaborated with Franzisca Siegrist in initiating and curating the yearly PAO Festival in Oslo (NO). The book PAO 7 Years was published in 2021 with Siegrist and Thorjussen as editors and launched at the PAO Festival 2021. Since 2006 Thorjussen has collaborated with Thale Fastvold, recently with art in public place projects like Bee Sanctuary Garden and the performance projects Gilde Trees and River Sisters. She holds a BFA from Kunsthåndverk- skolen in Bergen (NO) and Parsons The New School in New York (USA).

Evamaria Schaller (Austria), born in Graz, Austria, lives and works in Cologne and Austria. Until 2011 she studied Videoart and Performance at the Academy of Media Arts in Cologne. After her graduation she received prizes, awards and scholarships for her artistic work, which oscillates between performance and video art. In her Live-Performances she deals with everyday actions and its absurdity. Schaller ́s own body is her measure. In her examinations she re ects and intervenes with site speci c conditions and creates actions or installations through simple, clear gestures. She transforms and decontextualize daily materials or found footage. Evamaria Schaller is co-founder of the PAErsche Aktionslabor in Cologne (2010) with which she initiates international performance art exchanges, festivals or conferences. The gift, hospitality and encounter are important to her to pass on through PAErsche and performance art itself. She describes her artistic process as an attempt to translate “time into images in space”. She shows her performance art internationally. She has participated in various performance art festivals and encounters (a.o.) in China, the Philippines, Indonesia, Thailand, Morocco, Turkey, Poland, Russia, France and Austria.

Franzisca Siegrist is a visual artist, born in Switzerland 1984, raised in Spain. Siegrist has been living in Oslo since 2010. Currently she is the guest artist at Ringsveen, Lillehammer. She holds a Master in Fine Art and a Master in Art Production from Spain, with an exchange year in Product Design in Norway. She has actively shown her work in Europe, in Asia and the USA. She is interested in today’s philosophical thoughts and how we humans live in our time, while at the same time she is concerned with pure artistic and aesthetic forms of expression such as abstraction.

Liv Reidun Brakstad is a Norwegian performance artist born in Rogaland, Norway in 1943. Brakstad made her artistic debut at the National Art Exhibition in Oslo in 1993 at the age of fifty. Brakstad has done performances in various parts of the world over the last 25 years. She is particularly famous for her unofficial performances like the one during the opening of the Venice biennial where she has been performing since 1995. Brakstad has since the debut been designated by using her own body as a work of art. Brakstad's art is often seen as a work of classical women's conventions, but her artwork takes a clear activist and political standpoint. Brakstad's ability to illuminate environmental matters on an international level has given her a voice at the international art scene. Brakstad has participated in numerous exhibitions and featured at some of the largest art institutions in the world. Her artistic work is highly recognized and she is one of the foremost performance artists in Norway. Brakstad, originally an educated nurse, is a graduate of The Nansen Humanistic Academy, Strykejernet Art School, lectures undef Prof Hilmar Fredriksen at the Norwegian Arts and Crafts School. She is a member of Norwegian artists (NBK) and the young artists' society (UKS).

With us during the festival, we also have writer Tone Gellein, born 1963 lives and work in Søndre Land, by Randsfjorden. Gellein’s work investigates text as a singular base for image (video/photo), as voice, as sound and as print- ed text. The subject of research of space in a cross section of reality; a platform for poetical dramaturgy and presence; to challenge and open up for exible categories. Her work has been shown my work in Finland, Norway, NYC and London. Gellein is one of the founders of PAO,Performance Art Oslo (2012). Studies and residences in Spain, Denmark, Italy, England and Scotland. Further studies and travels in New York City, Japan and Finland. Education: Master (MFA) Art Writing, Goldsmiths Col- lege, London. Award for best master project by Book Works. Studies in theatre theory, criminol- ogy and social anthropology at UiO (Universi- ty of Oslo) and UiB. Art in the City, UiT. Dance education from Denmark, Norway and Spain.